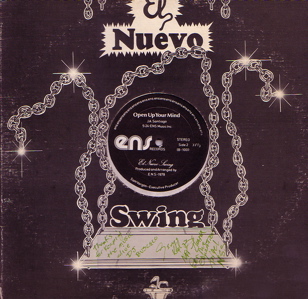 today’s post comes from friend and mentor DJ Busquelo (www.busquelo.org) who hosts The Mambo Machine on WKCR and has put together an amazing event, Tropic Of Cancer, happening tonight in NYC!

A record collector often finds himself in a world of imagined memories, among records that were heard before, in some other place and time, perhaps danced to, cried to, or even made love to. Very rarely do we find an opportunity to really learn the context of the forgotten place and time. One record which always held a mysterious place in my heart was this extremely funky 12″. This private disco 12″, with salsa on one side, latin funk on the other, and the group name”El Nuevo Swing” hinted at the 60’s combo, The New Swing Sextette, who recorded 4 incredible albums on the Cotique label. However, nobody who I asked ever knew anything about this 12.

One day this past July, We received a special honor on our radio show The Mambo Machine. when 2 members of The New Swing Sextette visited to promote the release of their first album in 30 years. The studio came alive with Angel and George’s energetic presence, and in the midst of all the vintage vinyl and their countless memories of the golden age of Latin music, I pulled out my mysterious ENS 12″ and said to them, “guys, I’ve been wanting to ask this question for such a long time: is this record YOU??”. Their jaws dropped, and they asked me where the heck did I get that record?

They took the record into their hands and looked at it the way an old man would look at a photo of a secret lover from years ago. They revealed the story of how they recorded a full album in 1976, 5 years after their last record on Cotique, that took their original vision of the group into new territory, exploring aspects of psychedelia, rock, soul, and disco, as well as their traditional Latin elements. For whatever reasons, the project got shelved by the record label, and they took it into their own hands and pressed a handful of these 12″s to get the music out. They said that this 12″ was only the 2nd one they have seen since those days, the first one being at Angel’s house.

This special 12″ is my contribution to the Captains Crate in honor of Tropic of Cancer which is taking place on Friday September 5th and celebrates tropical music and its many branches all over the world. Thanks to Captain Planet for such a rich and entertaining place to share such gems.