To A Special Place 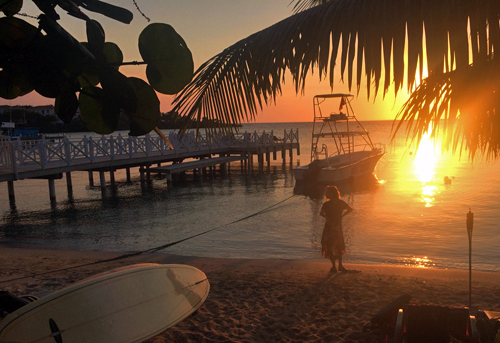 I’m feeling quite transformed and rejuvenated after returning home from a week in Roatan, Honduras. It was a nice solid stretch of time removed from my cell phone and email. Essential head space game changer. In addition to being surrounded by tropical beachside glory, I spent almost every day dropping beneath the surface of the water with a tank of air on my back, exploring the insanely vibrant and psychedelic coral reef society surrounding the island. This is something I will definitely need to do again, and again… I find immense value in a “sport” that is essentially all about slowing your breathing, relaxing as much as possible, and simply focusing on appreciating the wonderous majesty of the natural world. Two weeks ago I would have been petrified to encounter a hammerhead shark, but after swimming alongside sea turtles and barracuda, coming face to face with moray eels, and passing by flying eagle rays, the sight of one of these prehistoric beasts in person was far from scary. Just another way that life gets deeper. Hopefully today’s selections can help take you there too.

Latimore :       Out To Get'cha (Soulist & DJ Vas Rework)
seriously funky soul tune that takes me UP. Shouts to Nickodemus for this joint.

Romare :       The Blues (It Began In Africa) &       Roots
regular reader Dangerscouse told me to check this guy a long time ago, but these tunes took a while to really soak in.

Sonzeira :       Sambaio ft. Seu Jorge (Jose Marquez Remix)
what a monster Afro-Brazilian tune! Thanks to James Lockwood for this one. Check the full release here

Osunlade :       Dionne
doesn’t get too much deeper than this one. Seems especially relevant as protesters once again flood the streets of Baltimore this week.