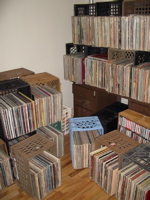 Sorry for the extended absence, I’ve been doing that thing that all record junkies (and other people who have more worldly possessions than they ought to) dread most: moving. Finding the apartment was an ordeal by it’s own right, but little compares to the extremely intense physical gauntlet presented by hauling crate after crate after crate after crate….. Turns out I have 5,000 records. It’s not merely physical either; the quest creates a mental torment in which the agonizing mover actually momentarily despises the very objects which, on any normal day, provide him or her with much needed solace and inspiration. So, it’s been a tough week, and now I’m neck deep in boxes trying to make sense of the madness.

Much thanks go out to my die hard crew of friends-for-life who actually did just as much lifting and carrying as I did for nothing more than a bit of curry and naan. I see you Shipley, Ix, DZ, Ant, and K-Money! I’mma make it up to y’all one day…

Another thing that this whole transition has reminded me, is that CDs are really not that bad a medium at all. I’ve thankfully not been having to flip from side A to side B with these bad boys in my stereo, it saves me that extra minute for breaking down cardbord and picking dust boogers. And this new music the kids are making nowadays, it’s darn good. Reminds me of the old wax cylinder days. These albums are good all the way through, to the last drop. They don’t get boring. Not once. Nope. Get them on CD so you won’t have to flip sides.

Fat Freddy you should know by now. They won the highly reputable Worldwide “Best Album Of 2005”. No flashy album art, just genius genre blending and and more soul than an Alabama church. If ya don’t know, now ya know…

And this album from Nino just came into my consciousness from outta nowhere. Won’t try to make any comparisons, cause it’s really quite unique. He does all vocals and instrumentation himself. RESPECT.