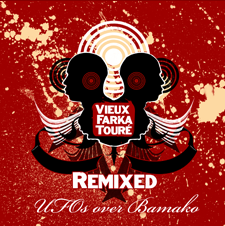 I’ve been meaning to put this out there for a while, sorry for sleeping.

Vieux Farka Toure, son of the legendary Malian blues guitarist Ali Farka Toure, has recently put out a beautiful album on the Modiba label. The record is a classic. In addition to making Vieux’s high caliber guitar skills finally available to listeners outside of Mali, the album also features the final recordings made by Ali in some beautiful duets with his son. In true Modiba fashion, 10% of proceeds go to a local organization in Mali which fights Malaria. SUPPORT THIS ORGANIZATION! BUY THE CD

All that was leading to this: the Remixed album. With the help of Derek Beres of Globesonic, Modiba has culled a very nice selection of Vieux remixes from folks like Nickodemus, Cheb-I-Sabbah, Chris Annibel, and DJ Center… to name a few. They have also done something pretty cutting edge in making sound files from the album publicly available for remixers to play with. There’s an open contest underway right now at CCMixter.org, so if you’re interested in participating HURRY! The deadline is in a couple of days. The winning remix will be added to the CD line-up and is a great way to get some proper intn’l recognition. Naw’m sayin? I spent a few frenzied days putting together this remix, and I think it came out pretty nice. Some afrobeat, brokenbeat, square-wave bassline biznizz dedicated to the dancefloor. I also had the pleasure of getting Jesse and Derek to come on my weekly radio show last Monday (sadly, Vieux couldn’t make it). So check out the show for more info on the whole project, exclusive live recordings of Vieux, and a sneak peek at some of the material from the upcoming remixed album.