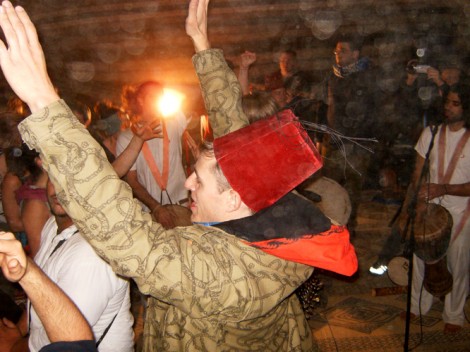 Apocalypse : Â Under The Eucalyptus Tree &Â No Place For Two On The Pole
taken from their self-titled album on NMC (1972)

Your loyal captain here, aka Chuck Wild, with the first check-in from Zion (I’m hoping there will be more, but it’s always a lil hard on the road). Young Murphy’s Law and I came here together in a brotherly burst of Jewish frugality- taking advantage of the most secular of Birthright trips- at the begining of the new year (still hung over, the both of us).Â

Despite rockets flying and bombs dropping (on the UN building!?!), we’re managing to explore the mellow maintained by Israelis even in the eye of the storm. We’re meeting genuinely great people in throngs and even finding some new music. I posted a few jew grooves back in Captain’s Crate (see:Â Soul Messengers, The Platina and Mordechai Ben David) but it’s been a while, and now I’m actually walking on their turf for the first time.Â

I was told that Apocalypse is kinda like the Israeli Led Zeppelin, and while they can’t really hold a torch to Page & Plant, we’ve been bumping this while cruising through the desert in our rented Fiat. On the quieter, more introspective side, I picked up this cool “experimental” record by two of Israel’s bigger musical names,Â Shlomo & Mathi. I like the cover they do of “Rocky Raccoon” on here as well.Â

Also, big up to Ido Wido (who I met in Tel Aviv) and the whole Soulico Crew! They’re a sick DJ/music making/party rocking collective who produce fly remixes and have a new album coming out on JDUB records soon…Â

If you’re looking for more of those old school 70’s rare Middle Eastern cuts, peep the that Soulico did a while back for the Mad Decent blog.Â