Phenomenal Got Me Clapping 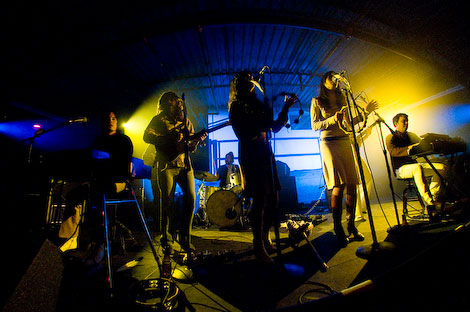 Watch out for this group! I found out about them when Murphy and O-Dub put out their “Ritmo Del Camino” mixtape a couple months ago and included “Baby” as the second to last song. Handclap actually reached out to us since their name was spelled wrong on the mixtape tracklist (“Handclapping”- blame it on dufus, not me), and asked for a correction and a myspace link. It’s taken me way too long to catch up, but here’s their myspace and their blog, and more photos from their last show at the Williamsburg Music Hall– what was I doing that night and why did I miss this?

Daniel CollÃ¡s andÂ Sean Marquand make up Embassy Sound Productions (ESP) who are responsible for putting this latest project together. If their names sound familiar perhaps it’s because you have the albums they produced for Uniao Black and Joe Bataan in recent years (comeback albums rarely ever sound this nice). Sean also happens to be one half of the DJ Duo that has been holding down Brazil Beat Brooklyn at Black Betty for years now- still my favorite Sunday night party. Psychedelic, funky, retro-futuristic- I’m eagerly awaiting the full album.