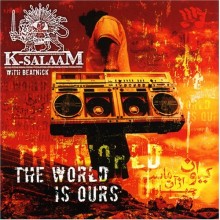 Finally! With the sounds of ice cream trucks parading the streets, my first Mix Tape Riot entry coincides with the the most beautiful day of the year in Brooklyn, which inspired me to post some pre-summer jams I’ve been feeling.Â  With the sunshine inevitably comes marination, so I got something a little older and a little newer from the Brooklyn production duo of K-Salaam & Beatnick to aid you in your quest for relaxation- These two have been putting out solid albums and mixtapes for quite some time, fusing equal parts boom bap and one drop elements to create their unified sound.Â  The merging of hip hop and reggae can often seem forced, but they keep their beats minimal, yet retain enough of the respective ingredients to get the job done nicely.Â  The synthesis is a little lighter here, but kind of reminds me of the old Boot Camp Click material meshing patois and classic reggae references with grimy kick drums and Barry White samples, or the hip hop/ jeep remixes on all the dancehall 12 inches from the nineties.Â  Another thing that initially drew me to their projects, is the diversity of the artists that they get, ranging from a whole array of hip hop luminaries like Dead Prez, Talib Kweli, Pharoah Monch, and the legendary Bobbito Garcia to reggae sureshots like Buju Banton, Capleton, Luciano, and Busy Signal. (Check out their myspace page for some interesting interviews with the various artists they’ve worked with along the way).

First jam up is “Victory,” an oldie but goodie from the album “The World Is Ours.”Â  This track brings together two heavyweights in Mos Def and Sizzla, trading verses on a banger that has seen plenty of airtime at previous summertime affairs, so it felt right to start here.Â  Nothing too fancy on this chune, just two very versatile and capable artists doing what they do best on a smooth, lazy day production.

Surprisingly, the newer tune, only released for download,Â  is a saucy little remix they did of the Jackson 5 anthemÂ  “Never Can Say Goodbye.”Â  While it’s often hazardous tampering with such classic material, they do it justice with a dirty guitar riff and subtle horn section to add just enough spice to the tune without diluting the original flavor.Â  (After reading those last couple sentences it’s clear that I can’t fire up Phil the Grill soon enough… that’s our BBQ for those not in the know).Â  Both of these cuts are equally effective in an opening set warming up the crowd or out on the patio warming up the coals, and are getting me really amplified for “Summertime in the NYC.”

K-Salaam & Beatnick ft. Mos Def and Sizzla-       Victory
From The World Is Ours on Rex Recordings