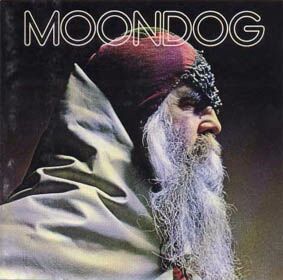 No the picture you see is not a still of Gandalf from Lord of the Rings.Â  It is Louis Hardin aka Moondog.Â  A blind son of a preacher from Marysville, Kansas.Â  After losing his sight in highschool to an exploding dynamite cap,(see your parents are right when they say be careful around DYN-O-MITE!!!)Â  he enrolled in various schools for the blind in the midwest and south before settling in Memphis, Tennessee.Â  (Later he moved to the greatest town in the world, aka NYC, and was known as the Viking of 6th Avenue.)Â  A classical composer at heart he made this song to sound like it was a free improvised jazz joint. But if you read the man’s liner notes, he is acutely aware of every couplet, note slur, tie and iambic septameter.Â  This funky cut, which has been sampled by numerous people and used in a car commercial or two is dedicated to Charlie Bird whom he met and talked to in the 50’s.Â  It’s called Lament (Bird’s Lament) and is just amazing.Â  It’sÂ  starts off quiet and is super short so in the days when I played the vinyls I would try to have the next record ready.Â  (Ah the good ol days…)Â  Any how, now it’s free for you to dj with through the magic of Protools and Serrato.Â  Enjoy!

Ps.Â  It’s a real shame you can’t see the whole image.Â  This is a gate fold album and the liner notes as well as the crazy pictures of him conducting are really cool.Â  But hey, who likes humping vinyl??