Watch Out for the Zimbabwean Yodeler 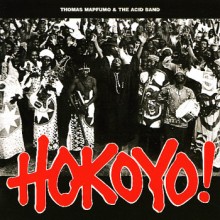 This is as real as revolution music gets. Recorded in the midst of a guerrilla war in which rebel insurgents were fighting to overthrow the white minority leadership of what was then known as Rhodesia, this album was the soundtrack to a coup. “Hokoyo!” means “Watch Out!”, and Mr. T. Mapfumo was not playing around. The melodies sound uplifting, borrowing from generations old Shona traditional songs, but buried within the ambiguous stories told in these proverbs are clear rally calls that inspired rural rebels to stand up and fight. It was working so well that the Rhodesian government banned these recordings, confiscated and destroyed them, and imprisoned Mapfumo for 90 days until they decided to try to use his powerful voice for their own purposes. They even went so far as to blast his music from their helicopters on bombing missions in the bush to demoralize the rebel opposition! In a final desperate attempt to utilize his rallying power, they forced him to perform in support of a government candidate. Guess it didn’t work, the whiteboys fell from their throne and the newly independent “Zimbabwe” was turned over by popular vote to Robert Mugabe. Happy ending right? Not quite. But I’ve been a Chimurenga freak forever and I’m deeply indebted to the diggers who just re-issued this hard to find early recording (can you hear that fuzz and crackle?). Now go drink some Hwa-Hwa and get in touch with the spirits while shaking like an epileptic to the sound of yodeling resistance.