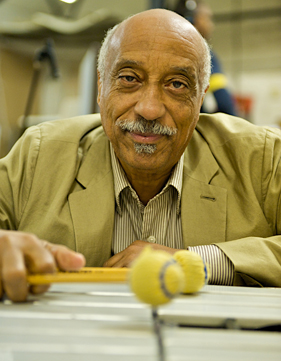 I’ve been hearing rumors for YEARS now that Mulatu (one of my all-time favorite artists) was going back in the studio to cut a new album. At first it was supposedly going to happen with Quantic, which I hope still comes into fruition someday. But when I heard that it finally did end up happening with the Heliocentrics (who I’ve blogged about a few times with various different projects they’ve been involved with), I got even more giddy. Malcolm Catto & crew have a way of making things sound raw, dirty and haunting unlike anyone else (aside from maybe Mulatu circa 1971). Their trademark mix of psychedelic funk is executed under what seems to me magical studio conditions- beyond being analogue/retro, it sounds like they must have a resident voodoo priest during recording sessions. According to this little sneak peek video on youtube, they don’t, but I can still pretend. Anyway, today I’m sharing the first track off the upcoming album. Listening to some other highlights off the album, I really can’t wait to have this beast in it’s entirety. Thanks to the good people at Strut, you can get a good idea of how it all runs together by listening to       this podcast too.