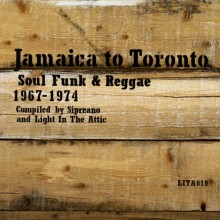 The world infamous Blue Jays. Romantic and mysterious road signs written in both French and English. The illustrious (and one-time world record holding) CN Tower. These are but a few of the many wonders that remain in my mind from childhood trips to visit my Grandma (Yaweh bless her soul) in Canada’s crown jewel: Toronto. All the while, I was entirely oblivious to the real treasures that the city had to offer in the form of raw funk, soul and ROOTS REGGAE. Funny how you can have an album for a while and not even listen to it properly for way too long. When I finally did revisit this collection, prompted by hearing “Memories” on a mix from my ever-schooling older sister, I was floored. Every cut on here is a winner, and even as the styles switch up from Northern Soul to dub, there’s a consistency to the whole mix that can only be attributed to one thing- the ethos of Toronto. Didn’t know it existed, certainly doubted it would be soulful if it was there at all, but once again my prejudicial mind was blinding me from the truth. Noel EllisÂ (son of Studio One/Treasure Isle legend Alton) delivers what I believe to be the greatest nostalgia song of all time. I accept challenges to this claim, but really, the crucial factor here is the extended dub which allows perfectly for someone such as myself (who loves to sing along, occasionally out of key) to go on a lengthy freestyle while the beat is tweaked and delayed into near cosmic oblivion. It’s as if the echoing chords are reverberating off the walls of my inner longing, disappearing into a faint whisper somewhere in my childhood where the sun was shining and the world was simple. REAL TALK. The other songs are kickass too. Really, you need to track down the whole album.Â

***ALSO*** My good friends have started a non-profit to raise education funds for Liberian refugees living in Ghana. Their kick-off fundraiser party is tomorrow in SOHO and everyone who goes gets a copy of the new West African mixtape I just made for the event. OPEN BAR 7-9, donation at the door, good peoples… more info here