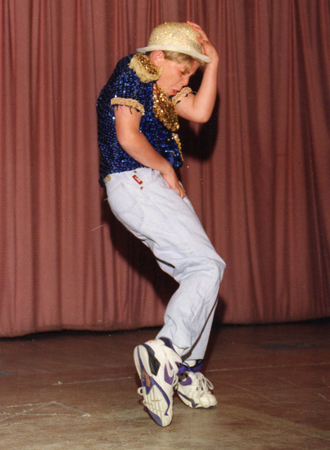 My first memory in life was at age 2: laserbeams, smoke machines, and MJ in a full suit of armor. The Jacksons Victory Tour. I know most people are already sick of the oversaturation of MJ tributes, constant radio/bar/club replays and BET video marathons, but I have a particularly high tolerance for the man’s work, so I hope you don’t mind if I share a few more tracks and memories, even if I’m a little late (I spent the past 4 days DJ-ing, performing, or dancing every night). The photo above is me circa ’92. Don’t remember what song I was dancing to, but it gives you a little idea of how much I idolized the man. At an even younger age, I would stare glossy-eyed at the photo inside the Thriller gatefold LP of MJ with the baby tiger- just dreaming of one day being as cool. Around four or five, I had my big sister apply a giant iron-on MJ face (intended as a make-your-own T-shirt) directly to my chest where it remained, gradually deteriorating bit by bit, for a couple months. The obsession inspired me to get into dancing, which I took very seriously, until middle school when the constant barrage of “faggot” remarks made me second guess my own flamboyance. If only those same kids could have seen me win the Michael Jackson dance-a-like contest at senior prom and go on to be crowned king! But when I stopped rocking the spandex and tap shoes is when I started focussing more on music making, which eventually brought me to where I am now- DJing, performing and producing music for a living. I don’t want to go too far overboard, but MJ definitely helped make me. Even my youngest brother, age 7, knows the entire History VHS tape back to front- the same one I used to study religiously. Looks like the family legacy will live on.

Maybe you’ve already picked up these MP3’s at one of the countless other blogs paying homage, but I thought I’d share a few of my favorite covers- including the one by Discovery that I just heard a couple weeks ago (autotune electro MJ!). I’m working on a remix as well, but that probably won’t be done for a little while since I’m crazy busy with other projects and am going out to Cali this Friday for some Beatards shows (yes, that’s us all over the soundtrack to MTV’s Real World Cancun right now- hilarious, I know). Â Enjoy the songs and long live the KING!

Discovery :       I Want You Back (death of Autotune version- long intro, wait for it)