New York Is Killing Me 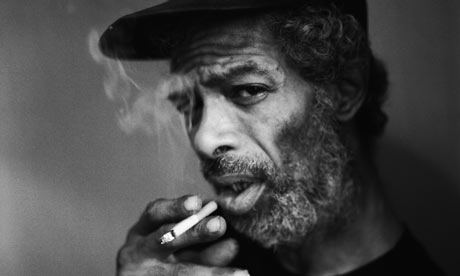 R.I.P. to a man who had an immeasurable influence on music in our time. Because there are so many people who’ve already written more meaningful and in-depth pieces about Gil Scott-Heron, I’m only going to direct those of you who are interested to places like Soul-Sides.com and extended friends where you can continue to explore all the things he did and hear the songs he made. I’m just greatful that I had a chance to see him play live last Spring, in a truly peak performance. The thing that struck me most, knowing well about his long battle with addiction, was how quick he remained- how attuned and perpetually inspired he clearly was. He could easily have made a career as a stand-up comedian/satirist- I would estimate that 50% of the show or more was simply him rapping about the world with razor sharp humor while casually riffing on the rhodes in front of him. There are way too many classic songs for me to start delving into his catalogue half-assed, but I figured I’d re-post the remix I made of him & Nas from last year, since you’re not likely to find it anywhere else. Peace go with you, brother.

New York Is Killing Me (Chuck Wild Remix) by ChuckWild