Viewing all items for tag VIA

The Mustangs : The Time For Loving Is Now
taken from the album “The Wonderful Side Of The Mustangs” on GBI (1975)

Born Jamericans : Wherever We Go
taken from the album “Yardcore” on Delicious Vinyl (1997)

First off, PROPS to Bryan Sawyer from Albany! Bluh Bluh! He was the first one to figure out the Scientist sample from last week… drumroll for you slowpokes… Madlib used that first 4 bars or so on a beat for Bay Area hip hop crew The Living Legends, the track is called “Blast Your Radio”, a hot single on a not so hot album. But still, mad love for the Legends. And Many thanks to all the folks who wrote me e-mails because they couldn’t post replies on my broke ass Haloscan. It’ll get right eventually, but don’t hold your breath.

More Caribbean music? Yep. Bop yer head and vibe out with a freshly sparked spliff resting on your lips. Go to the beach, roadtrip, sit on the couch in front of the fan with an iced beverage. Ahhh.

We start off with a funky rocksteady tune from the Bahamas actually. Can’t tell you much about The Mustangs. I love this tune all the way through, banging break to final lovey-dove chorus; even with that unintentional vocal distortion. Sometimes we grow fond of defects. You can find the LP along with a bunch of other over priced drool enducing vinyl at Diaspora Records.

This Byron Lee record can leave you drooling for entirely different reasons. HA! The classic Jamaican poster girl, with wet tee, coming out of the water to greet you (the theme of minimally clothed women seems to be a common selling point for his LPs). Byron was (and still is) a highly prolific artist of the kitschy kind. Many of his albums feature cover versions galore- often cheesed up beyond tolerablility. But, to his credit, the man has orchestrated some serious groove construction in his day and helped pave the way for Jamaican music’s international appeal while Bob Marley was still learning how to play a chord. This Rockers track is perfect midafternoon sweaty-bed soundtrack material.

Finally, a little more ragga hop- this time coming outta Connecticut. I had the great pleasure of actually kicking it with Notch (the singer of the group) this past week while picking out possible beats for his upcoming album (did I say that? shhh, I’ll get myself in trouble). This group pretty much epitomized the classic reggae – meets – hip hop flavor that was boomin’ in ya jeep during the mid 90’s. Kids From Foreign, the group’s debut, was notable in it’s re-usage of many original reggae riddims. While lot of ragga heads steered towards straight ahead hip hop beats, Born Jamericans kept the classic basslines and made them sound fresh. “Wherever We Go” gets its groove from Dennis Brown’s “Revolution” riddim produced originally by Aswad (I believe- maybe it was Sly & Robbie). Referencing that classic track is what made me pick “Wherever” over the brilliantly catchy “Send My Love” song from the same album- if only I had the capability to give you ALL THE MUSIC THAT IS DOPE. Until then, stay tuned…

Oh yeah, one last thing (courtesy of Moistworks), check out the sickest “Robot Dance” ever!

Ini Kamoze : World-A-Music
taken from his self-titled album on Island (1983)

Fela Anikulapo-Kuti & The Afrika 70 : Colonial Mentality
taken from the album “Black-President” on Capitol/EMI (1984)

First off, RIZE is officially the SHIT. At first I would have qualified that statement by detracting the super cheesy 3-minute “uplifting” segment where we see all the characters in Easter egg lighting while an attrocious Christina Aguilera song blares. But then someone made the connection for me, how David LaChapelle actually met all these cats through the filming of a Christina video. Somehow that makes it fit for me. The point is, if any of y’all see me at a dance party anytime soon, you better watch-the-fuggout!

Meanwhile, my ever-compassionate girlfriend agreed yet again to feed a friend’s cat during this past week. She operates in the yogi community, who live as strict vegetarians (or vegans), yet feed their cats nothing but gourmet fish platters- including organic avacado, tomato, lettuce and seasonings. I’m down, not a cat man myself though. I happened to accompany melady during her friendly chore on Saturday for this particular cat owning yogi, and took notice of a dusty (and catscratched) stack of vinyl in the corner of her West Village apartment. She’s a bit of a world traveller (I believe the reason for needing a sitter this time is due to a Moroccan expedition) and after a little dusting of my fingers, I was honestly quite blow away by her delectible selections. I had to borrow a couple, okay, so I took 10 give or take a few. But I will return them ALL (in much cleaner condition than I found them) unless this particular yogi is interested in cutting a deal… keep in mind, I don’t think this particular yogi even owns a phonograph anymore. These are three records off the top of the stack.

This Ini Kamoze album is pretty solid all the way through, a definite Taxi Production. I’m going with the obvious summer favorite here ’cause I’m not getting sick of hearing Jr. Gong rap all wikkid-like on top of this riddim. Ini Kamoze was a vegetarian too, a raw foodist in fact (at least at the time of the recording).

Ok, she’s got Fela in her collection? Not bad at all. Originally released on the B-side of the 1977 Sorrow, Tears & Blood album, this tune speaks out against Christians and Muslims alike in their colonizing effect on Afrikan people. Not one for organized religion, I gotta take my hat off to the Black-President yet again. For anyone who digs more than this vicious bassline, please check out this book, and this DVD. And for collector freaks like me, peep the ill discography.

Finding Ere Mela Mela is what really let me know that this particular yogi is way ahead of the game. I mean, not a lot of cats in the mid 80’s “World Beat” boom were digging this deep. I have the Buda Musique reissue that came out recently, but that one doesn’t have “Bemin” on it. You can however find it, along with a bunch of other undoubtedly beautiful stuff, on this CD from the Ethiopiques collection. 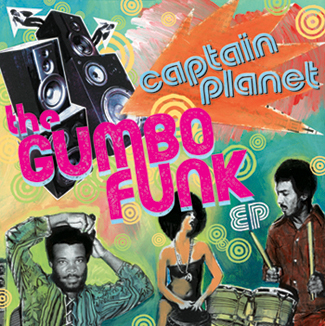 It’s Ant from News & Booze letting you all know that Charlie’s mellowing out in the Dominican Republic for a week camping on a beach far, far away from any sort of tekmology. He’ll be back on Monday dropping regularly scheduled jewels, but for now, I’m getting the hype machine all generated for the release of the upcoming Gumbo Funk EP, Captain Planet’s solo debut.

6 tracks deep, todas las producciones originales, the project gets the Via seal of approval like whoa. I’m not going to front like I even know the first thing about music journalism, so instead of trying to poorly articulate my opinion (I just like what I like), I’m throwing up the cover art with the hopes that it gives you a semi-idea of what to expect from Charlie’s music: ish is funky fun colorful ish, and will keep you dancing the whole way through.

Keep peeping Via for the proper release date, but for all the heads fiending for some new (and old) muzak, cruise on over to our Loose Tape section, where Chaz posted his spot on WNYU’s Rotation. Available for streaming or downloading (is this what podcasting is? still unsure…), the mix should keep you kids occupied with enough tunes until the Captain comes back on May 2nd. And lest I forget, Charlie drops a sneak preview of the new EP midway through with La Reina.

The Lijadu Sisters : Danger
taken from the album “Danger” on Afrodisiac (1976)

First entry, jeah! I wanted to drop this highly combustible combo pack as an offering. What you see here, or hear here, is a brief introduction to some of my favorite things– namely, rare old funky gems from foreign countries. Hopefully, after a few months of this blog, some of these tunes won’t come accross as being too foreign at all. That’s when I’ll start to drop the really HEAVY shiz on ya! So, about the tunes…

An entire era before M.I.A. was stirring shit up with her punky, funny, poilitical, crunky sound; The Lijadu Sisters (Kehinde and Taiwo) were tearing down similar musical barriers in Nigeria. Emerging from the midst of Afrobeat’s primordial ooze, these young gorgeous twins sound more like a mix of Le Tigre and Grace Jones than they do Fela. A Track from one of their later albums was put on the highly recommended NIGERIA 70 comilation put out by AfroStrut. I got this record at the WFMU record fair for a five-spot- that’s the beauty of diggin’. Supposedly they live in Brooklyn now, I should look them up.

Antonio Carlos (not Jobim) & Jocafi have had a long-lasting musical relationship, but nothing compares to the heaviness of their work in the early 70’s. Pure, un-abashed Brazilian funk. They’ve been featured on several comps recently, even Afro-funk collections, but I haven’t seen this track surface yet. Screaming guitar, driving bass, yodeling, and horns that punch harder than the Game’s hottest lines.

Last but certainly not least, Bollywood legend Asha Bhosle recorded this ditty with her genius-composer husband R.D. Burman at a live concert in 1978. It was their first time performing in London: two nights, massive crowds, setlists that covered a substantial chunk of the then-contemporary Bollywood hits. I chose this tune (it’s an edited version, as the double-LP doesn’t have track breaks) in part because the original was recently sampled for Method Man’s single “What’s Happening” (the sample could have been freaked MUCH harder), but also because the movie that it’s taken from, “Hare Rama Hare Krishna”, is a MUST SEE for anyone who thinks that too much chanting (particularly in conjunction with large doses of opium and heroin) has potentially harmful effects. This same edited version of the song has also been re-released by the wonderful folks who brought us Sitar Beat Vol’s 1 and 2. Thank them, and then go watch that movie!