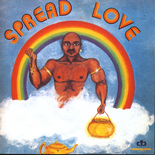 Michael Orr: Spread Love and You Opened My Eyes To The World
Taken from the album Spread Love on Sunstar(1976)

Some seek that elusive sample from an old De La Soul record. Others crave the glossy black gold that is a fresh slab of M- (that’s mint minus for you non-Ebayers) wax… Sometimes though, an album cover is enough. As to whether or not an album cover alone warrants dropping serious cheddar–well, that’s another question entirely… And one I failed to ask myself prior to bidding waaaay too much money on a record I had never even heard of. But such is the lure of a hand-drawn genie.

1) I hate to admit this (don’t $%@# with my feedback!), but I managed to fabricate an extremely bogus excuse to get me off the hook with the seller: I told him my kid sister hacked my Ebay account and bid on the precious disc without my knowing it. Heinous, I know. But he believed me and let me back out. Whew.

2) By the grace of curiosity, diligence and Emusic (who woulda guessed!) I managed to track down the source material, which, I believe, does no small justice to the transcendent cover art.

Spread love, indeed. Nothing says it like a mustachioed genie chillin’ on a cloud with a pot of gold. Nothing that is, except the stone cold croon of Michael Orr lacing a blistering synthed-out mid-seventies jazzfunk instrumental with lyrics that would leave Erykah Badu feeling spiritually vacant. Orr is like a cross between Gil Scott Heron, Andy Bey, and Dwight Trible. A highly polished effort by a serious contender for the next Dalai Lama. Damn! Spreading love like a mother.

PS. The album gets production credit from Carey Harris, who is my new hero, and about whom I know little to nothing. If you’ve got any clues… Holla!