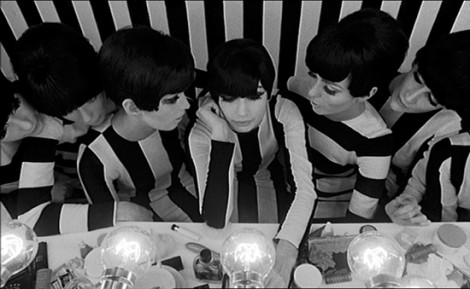 A long while back (in the old Captain’s Crate blog) I posted a cut off a soundtrack by the Greek groover Mikis Theodorakis and someone commented that it was clearly an interpolation of a song by French composer Pierre Henry (that went on to be interpreted again as the theme song for the cartoon Futurama). After pretty much forgetting about all that, I finally got my hands on the original version which really is an ahead-of-it’s-time futuristic synth bugout- peep the video for the full craziness. I’ve heard a few moog records in my day, but this one really goes beyond novelty.

One song always leads me to another, and right after stumbling uponÂ “Psyche Rock” a friend shared this great French 60’s beatnik compilation with me- Atomic Cafe. The supremely bouncy Charlotte Leslie cut and Jean-Jaques Perry‘s moog monster “E.V.A.” both come from that collection. Sounds like Perry was ripping off Pierre pretty heavily on this one, even down to the church bells, but I like his addition of trippy processed vocals and that ghostly keyboard that floats around in the background. The Fatboy Slim remix is just a little something extra I found while digging around online- I suppose it might be possible to drop this into a set somewhere, just gotta find the right party.