Back To The Crate 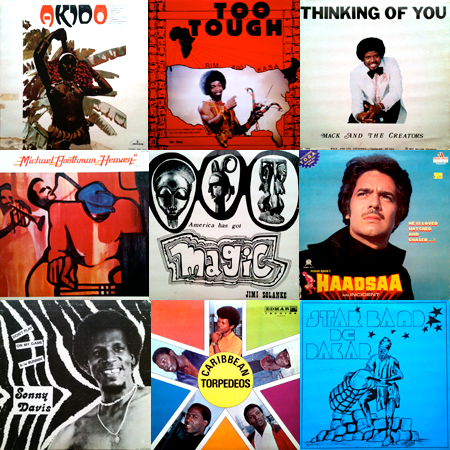 Sometimes I have to return to the basics, to the beautiful things that got me into blogging to begin with, and one of my primary inspirations for making music… OLD VINYL! I don’t have the time to digitize these bad boys as often as I’d like, but when I do, you better believe I’m gonna pull out some secret stash gems. Here’s a handful of recent digging discoveries, good ole gumbo funk for the masses…

Rim & Kasa :       Love Me For Real
Most people know this funky ex-Fela drummer from his earlier LP Rim Arrives, but don’t sleep on this ‘mini-album’Â called Too Tough which introduced the wolrd to his unique ‘Combination Music’ & the ‘Earthboogie Dance’. Sounds like pure ‘Gumbo Funk’ to me. Heavy break around minute 4 mark is NOT TO BE MISSED.

Michael Boothman :       Greasy
Boothman verges on too smooth here, but hits it home on Greasy with a hard syncopated breakbeat and airy vocals that would have been fitting on a top tier 70’s release from Quincy Jones or Roy Ayers. The little steel drum is a nice touch in the mix as well.

Jimi Solanke :       Owo Orisa
I really don’t know much about the man behind this record, but once again, when I saw this record cover at the flea a few weeks back, I just knew it HAD to be good.

Sonny Davis :       Runnin'
from St. Thomas (the Virgin Islands) we have Mr. Davis. Also a member of Tremile & The Jamals, this 2-track disco 12″ might be the man’s only solo release.

Caribbean Torpedoes :       Love Making Mood &       Freedom Ride
can we just take a moment to appreciate that these guys misspelled their own band name on the cover!?! Apparently a later pressing of the same record fixed that problem. I’m a total sucker for wah-wah ballads (shouldn’t this be a genre?) and Love Making Mood is a prime example. Also a lover of drum breaks, and Freedom RideÂ has a goodie!

Star Band De Dakar :       Cheri Coco &       Malaguena
it’s no secret that I’m a bit of a fanatic when it comes to African music. This is one of the few records here that I actually spent some significant loot on, and happily! This entire Star Band LP, while it may sound like it was recorded using technology from the 30’s, is a beautiful coming together of Cuban classics with a Senegalese Mbalax twist.