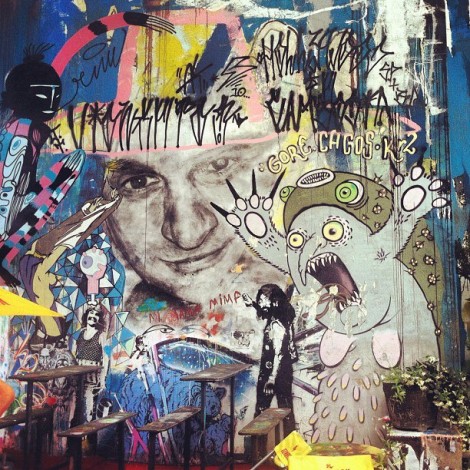 New bass for your face. Some Moombah, lil bit of Latin, touch of Balkan, and some heavy African joints. My Subsuelo homies are kicking off a new party this Friday at El Cid where music like this will be the  modus operandi. LA heads should come through. Shoutout to my dude Koury Angelo for the fresh pic which was taken at a bar somewhere in S. America I believe.

Fuse :       Antenna hotter than lava Azonto Afro pop from Ghana. Shouts to my girl Azza for the heads up on this one. Hopefully this joint will continue to inspire more public dancing.

CongopunQ, Papy Mbavu & Flamme Kapaya :       Danse du Charlot Scié LOVE this track, which I discovered on the soundtrack to Viva Riva. Watch it, be amazed, then get the full soundtrack of Congolese gems.

Radioclit :       Secousse All Stars more fire from the Riva soundtrack from a pretty familiar face in the global bass scene.

Yankee Zulu & Worthy :       Concumbia (Original Mix) never heard of these guys, but this one is seriously infectious. Shouts to DJ Gozar for the heads up.

Boogaloo :       It's Not OK But Alright new one from Boogaloo, if you weren’t already, get familiar.